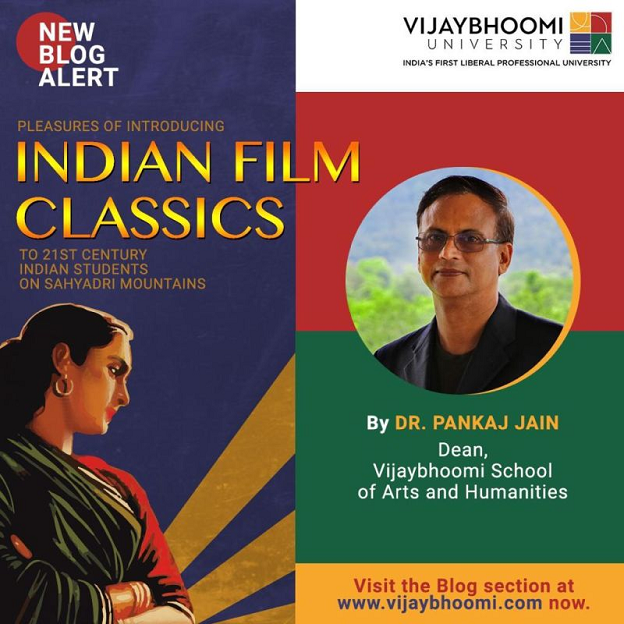 As a young boy growing up in Pali, Rajasthan, my primary entertainment channel was Hindi films appearing on our local cinema halls Rajendra, Narsingha, and Manthan “Talkies,” as we referred to our cinema halls. Without realizing that the word “talkies” plainly referred to the films of “sound” as the likes of Alam Ara (1931). In addition to movies, Vividh Bharati was another source of entertainment with a heavy dose of Rafi, Kishore, Mukesh, Lata, and Asha songs. Oh, the golden memories of our childhood! We all cherish them forever!

A few decades later, I found myself transplanted at Columbia University (New York) as a graduate student and later at the University of Iowa as a doctoral candidate in the Department of Religious Studies with non-Indian experts in Sanskrit, Hindi, and Hindi films. My childhood seeds of Hindi films found a fertile ground to flourish. Inspired by my teachers there, immediately after the Ph.D., I offered my first Indian film course for undergraduates at North Carolina State University in Raleigh, while teaching similar courses at the University of North Texas.

Fast forward to the present time, I find myself at Vijaybhoomi University, idyllically located on Sahyadri Mountains between Mumbai and Pune, an ideal location for making films and teaching about them! The university is surrounded not just by mountains, waterfalls, clouds, farms, and forests, but also by film studios and farmhouses owned by the film artists. However, the pleasure of teaching Indian films in India, for the first time, is not just because of being able to discuss Indian culture back in my motherland for the first time.

My students watched SUJATA for the first session. Absolute bliss, a dream come true when the 1959 black-and-white film appears alive with the students of the 21st century, whose only connection to Sunil Dutt and Nutan are their respective children Sanjay Dutt and Mohnish Bahl. It is the enduring legacy of the great Bimal Roy that inspires people of all ages – he made truly transcendental classic films for all times. Sun Mere Bandhu Re by S D Burman, lyrics by Majrooh Sultanpuri, feel free to hum and all the other tuneful songs too! #ClassicsForEver #FirstFilmCourse Jalte hain jiske liye based on Raag Kafi, Kali ghata chhaye mora jiya ghabraye based on Raag Pilu.